Punic was a civilization that rose out of the small port city of Carthage following the conquest of Phoenicia and the Siege of Tyre by Alexander the Great in 332 BCE. The city of Carthage and the accompanying empire were based off the northern coast of Africa and within one hundred years became the wealthiest city on the Mediterranean once again. However, their territorial expansion and massive wealth soon made them a target and when they seized the island of Sicily a young Roman Republic declared war on the city of Carthage.

In a series of wars known as the Punic Wars the city of Carthage almost crushed Rome but instead ran out momentum and was crushed instead. The loss of the Punic Wars meant the end of the brief Punic civilization and ultimately the hegemony of the Phoenicians and their descendants in the Mediterranean Sea that had existed for hundreds of years. 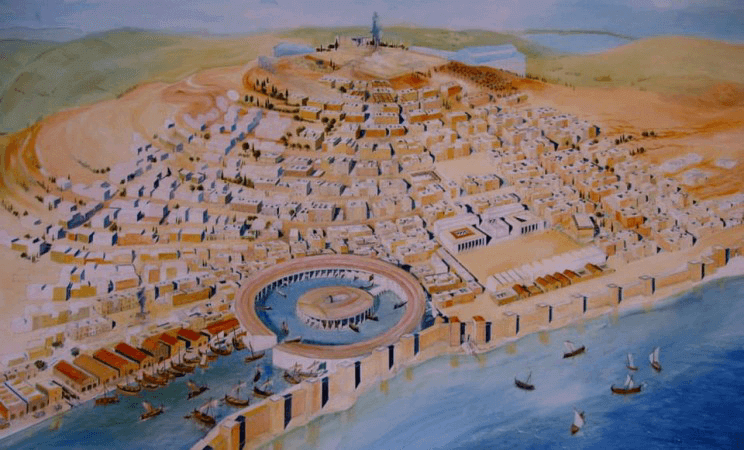 The Punics ultimately were descendants of the Phoenicia civilization however, there are far too many differences to classify these two as the same civilization. The massive empire that developed out of Carthage, while using the foundations and framework of their ancestors was actually much different in many regards than previous Phoenicia.

. Unlike other Phoenicians, Punics had a landowning aristocracy who established a rule of the hinterland in Northern Africa and trans-Sahara traderoutes. In later times one of these clans established a Hellenistic-inspired empire in Iberia, possibly having a foothold in western Gaul. Like other Phoenician people, their urbanized culture and economy were strongly linked to the sea. Overseas they established control over some coastal regions of Berber North Africa like modern-day Tunisia and Libya, of Sardinia, Corsica, Sicily, the Balearic Islands, Malta, other small islands of the western Mediterranean and possibly along the Atlantic coast of Iberia. In the Balearic Islands, Sardinia, Corsica and Sicily they had strong economic and political ties to the independent natives in the hinterland. Their naval presence and trade extended throughout the Mediterranean and beyond to the British Isles, the Canaries, and West Africa.[1] Technical achievements of the Punic people of Carthage include the development of uncolored glass and the use of lacustrine limestone to improve the purity of molten iron.Most of the Punic culture was destroyed as a result of the Punic Wars fought between Rome and Carthage from 264 to 146 BC,[2] while traces of language, religion and technology could still be found in Africa during the early Christianisation, 325 to 650 AD. After the Punic Wars, Romans used the term Punic as an adjective meaning treacherous.In archaeological and linguistic usage Punic refers to a Hellenistic and later-era culture and dialect from Carthage that had developed into a distinct form from the Phoenician of the mother city of Tyre. Phoenicians also settled in Northwest Africa (the Maghreb) and other areas under Carthaginian rule and their culture and political organisation were a distinct form. Remains of the Punic culture can be found in settlements from the Iberian Peninsula in the West to Cyprus in the East. 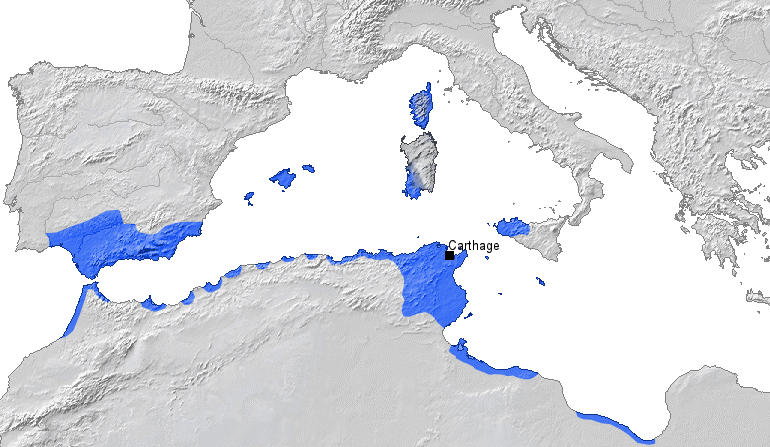 The Punic religion was based on that of their Phoenician forefathers, who worshiped Baal-hamon and Melqart, but merged Phoenician ideas with Numidian and some Greek and Egyptian deities, such as Apollo, Tanit and Dionysus, with Baal-hamon being clearly the most important Punic god. [3] Punic culture became a melting pot, since Carthage was a big trading port in the known world, but the Carthaginians retained some of their old cultural identities and practices, such as child sacrifice.[citation needed] This was not outside of regional norms, as many cultures of the time made human sacrifices, including the Greeks, Celts, and Romans.The Punics carried out significant sea explorations around Africa and elsewhere from their base in Carthage. In the fifth century BC Hanno the Navigator played a significant role in exploring coastal areas of present day Morocco and other parts of the African coast, specifically noting details of indigenous peoples such as at Mogador.[4][5] Punics pushed westerly into the Atlantic and established important settlements in Lixus, Volubilis, Chellah and Mogador, among other locations.Greek-Punic and Roman-Punic Wars[edit]Being trade rivals with Magna Graecia, the Punics had several clashes with the Greeks over the island of Sicily in the Greek-Punic Wars from 600-265 BC. They eventually fought Rome in the Roman-Punic Wars, between 265-146 BC, but lost due to being outnumbered, lack of full governmental involvement and reliance on their navy. This enabled a Roman settlement of Africa and eventual domination of the Mediterranean Sea. Cato the Elder famously ended all his speeches, regardless of subject, with the imperative that Carthage be utterly crushed, a view summarised in Latin by the phrase Praeterea censeo Carthaginem esse delendam meaning, "Moreover, I declare, Carthage must be destroyed!". They were eventually incorporated into the Roman Republic in 146 BC with the destruction of Carthage but Cato never got to see his victory, having died in 149 BC.146 BC to 700 AD[edit]The destuction of Carthage wasn't the end of the Punics. After the wars, the vicinity of Carthage was salted and placed under a curse by the Romans, so that no one would live there and the place would not be repopulated. There were, however, other Punic cities in North Africa, and Carthage itself was rebuilt and regained some importance, if a shadow of its ancient influence. Although the area was partially romanized and the some of the population adopted the Roman religion (while fusing it with aspects of their beliefs and customs), the language and the ethnicity persisted for some time. People of Punic origin prospered again as traders, merchants and even politicians of the Roman Empire. Septimius Severus, emperor of Rome and a proud Punic, was said to speak Latin with a Punic accent. Under his reign Punics rose to the elites and their deities entered their imperial cult. Carthage was rebuilt about 46 BC by Julius Caesar. Places in the area were granted for settlement as benefits to soldiers that had served in Roman armies. Carthage again prospered and even became the number two trading city in the Roman Empire, until Constantinople took over that position. As Christianity spread in the Roman Empire, it was especially successful in Northern Africa, Carthage becoming a Christian city even before Christianity was legal. Saint Augustine, born in Thagaste (modern-day Algeria) considered himself Punic, and left some important reflections on Punic cultural history.[6] One of his more well known passages reads: "It is an excellent thing that the Punic Christians call Baptism itself nothing else but salvation, and the Sacrament of Christ's Body nothing else but life."[7]The last remains of a distinct Punic culture probably disappeared somewhere in the chaos during the Fall of Rome. The demographic and cultural characteristics of the region were thoroughly transformed by turbulent events such as the Vandals' wars with Byzantines, the forced population movements that followed and the Arab conquest in the 7th century.Noted Punics[edit]Septimius Severus (Roman emperor from Punic ethnicity from the mainly Punic Libyan city of Lepcis Magna, founded by Phoenicians)Caracalla, his sonTertullian, an early Christian theologian (born in the highly multiethnic, Phoenician-founded city of Carthage)Vibia Perpetua (early Christian martyr, also born in Carthage)Cyprian (also born in Carthage)Hannibal, Carthaginian generalSaint Monica, mother of Augustine of HippoSt Augustine